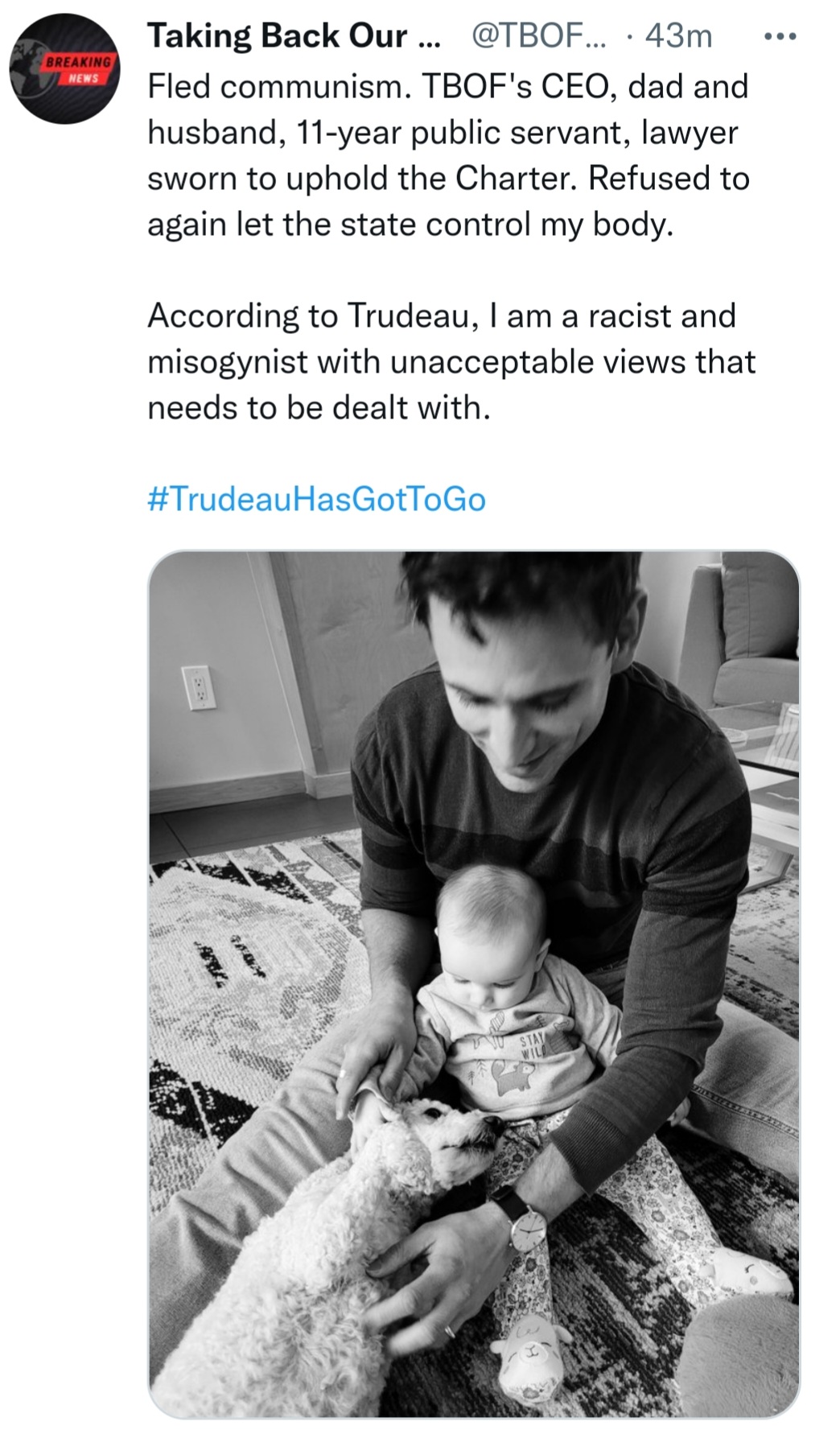 This Tuesday, Canadian Twitter user “@martyupnorth_2” shared a simple tweet like this one here. A little bit about who he is and what he believes in and based on that, he belongs to the group of people Prime Minister Justin Trudeau publicly targeted as “racists” and “misogynists” with “unacceptable views” and challenged Canadians to reflect on whether we should “tolerate these people”. He signed off his tweet with “#TrudeauHasGotToGo”.

Although millions of Canadians have taken to social media to express their disdain for Trudeau, Marty’s post seems to have caught the zeitgeist.

Within minutes, hundreds of Canadians did their own personal post. Within hours, Marty’s hashtag was trending #1 on Twitter in Canada.

It has now been five days; #TrudeauHasGotToGo is still trending #1 in Canada (TBOF certainly encourages all Canadians to join in on this spontaneous initiative and share their own story).

As of this Saturday morning, hundreds of thousands of real, everyday Canadians from a variety of backgrounds, vocations, and political views have shared their own story and condemnation of Trudeau.

The beautiful and genuine “multicultural mosaic” of Canada on full display for all of the world to see. And they have – as even foreigners have started sharing their own stories, concluding that Trudeau would probably see them as a threat to ever entering Canada because of their “unacceptable views”.

This organic, grassroots groundswell of open defiance and desire for an immediate change in government from such a broad spectrum of Canadian society is sending the Liberal Party into full blown panic mode. “Journalists” like Dean Blundell and former top Trudeau PMO aide, Gerald Butts have been desperately trying to portray this as a planned and paid for “bot campaign”.

It’s not working, and independent media are catching on.

Something in the air has clearly changed. After nearly three years of being divided, segregated, intimidated, and censored, Canadians from all corners seem be uniting: against Trudeau, against the Liberal Party, and generally against the hateful “woke” and “social justice” culture that created the environment in the first place wherein we would ever turn against one another based on personal health decisions.

Marty’s tweet also followed the absolutely resounding victory of Pierre Poilievre as the new leader of the Conservative party of Canada – earning 68% of the vote and 330 of 338 ridings across Canada. A prime thrust of his campaign centred around freedom and ending all C-19 restrictions and mandates. The CPC now has more registered members than all of the other federal parties combined, and then some (~650,000). This level of participation in a political party is unprecedented in Canada.

Mr. Poilievre îs certainly a well-meaning individual, but it is plainly evident that the energy and momentum behind him is, like Marty’s tweet, another example of the Canadian zeitgeist materializing and crystallizing in direct opposition to Trudeau, the LPC, and the vile and nation-destroying woke and social justice ideology they have peddled for nearly a decade.

We are witnessing the LPC meltdown in real time now.

Just a few days ago, the LPC was still proudly standing behind its C-19 border restrictions, mandates, and ArriveCan app. Last night, the government leaked to the Toronto Star, via “journalist” Althia Raj no less, that they were “considering” ending the remaining C-19 restrictions.

The science, of course, has not changed. But the LPC is suddenly desperate to return the vile spirits they unleashed from Pandora’s box and deny Poilievre this point of attack.

Too little. Too late.

The social energy that has been bottled up among millions of fair-minded, honest, tax-paying, and rule-abiding Canadians is now beginning to blast out.

The Canadian zeitgeist will only increase in intensity and momentum and it will not rest until Trudeau is gone from office.

If you have a twitter account, we strongly urge you to consider sharing your story and a photo of yourself like Marty and our CEO did – and do not forget the hashtag #TrudeauHasGotToGo !!!